This is a list of some of the projects I made during high school. Other projects and photos can be found at projects.adamh.cz and old.adamh.cz. 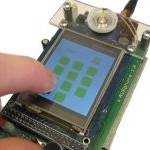 A DIY touch-screen controlled mobile phone built around a LCD display, an AVR microcontroller and a GSM module. The custom GUI implemented basic functionality such as making calls, sending and receiving text messages or browsing photos stored on a SD card.

1st place at the national student project competition SOČ and EPO's prize for originality at the international EUCYS competition. 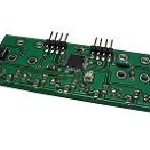 An intelligent line sensor for small line-following robots. The sensor contains five reflective infrared sensors together with an AVR microcontroller for sampling and calculation of the line position. Created for jBot robot which participated in the Istrobot competition. 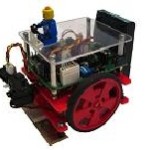 Small line following robot created together with my friend Zbyněk Moravec (programming) for the Istrobot competition. The robot, controlled by an AVR microcontroller, was equipped with a Bluetooth module for wireless configuration and programming, infrared sensor for line detection and servo mounted distance sensor for obstacle avoiding (video). 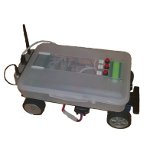 An autonomous robot built around RC car chassis (and lunch box) controlled by a router board with an OpenWRT distribution and a few electronic modules for reading sensors. Using a compass and optical encoder it was able to follow learned track.

3rd place at the national student project competition SOČ and prize by the Czech Learned Society.