I have written a simple round-robin scheduler (available on GitHub) for the ARM Cortex-M0 (ARMv6-M) CPU to understand the context switch mechanism. This article is a short summary of its principle.

The same approach is used by many RTOSes and is well described in The Definitive Guide to ARM® Cortex®-M0 and Cortex-M0+ Processors by Joseph Yiu.

In this application, tasks run in the Unprivileged Thread Mode with PSP and kernel runs in the Handler Mode with MSP. This allows stack separation between the kernel and tasks (which simplifies the context switch procedure) and prevents tasks from accessing important registers and affecting the kernel.

The context switch happens in an interrupt handler. Once an interrupt occurs, the NVIC hardware automatically stacks an exception frame (registers xPSR, PC, LR, r12 and r3-r0) onto the Process Stack (PSP) and branches to the interrupt handler routine in Handler Mode (which uses the Main Stack).

The context switch routine has to:

Exception frame saved by the NVIC hardware onto stack:

Registers saved by the software:

The context switch could be performed by the SysTick_Handler with a SysTick timer configured to fire interrupts periodically: 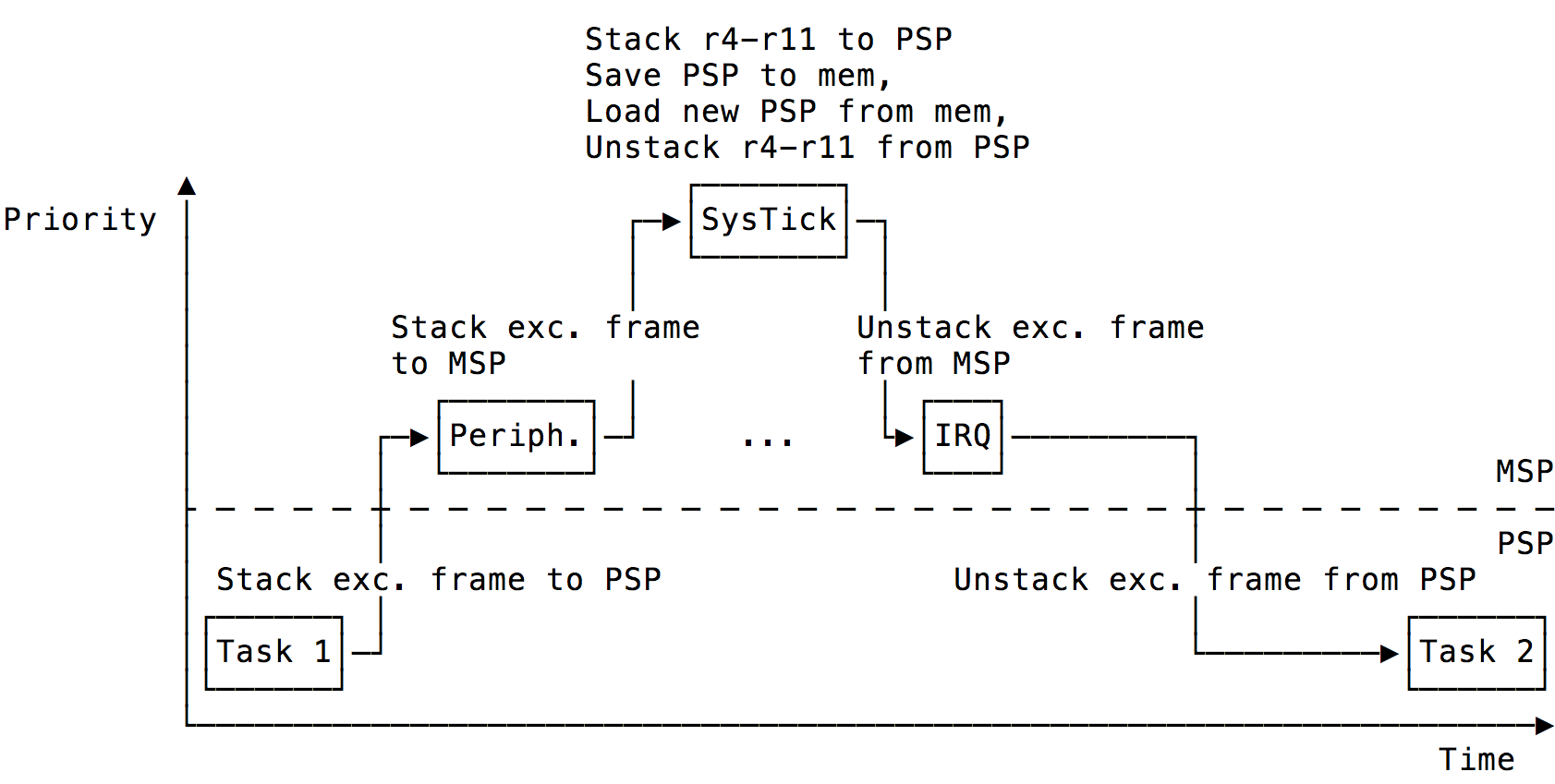 The PendSV_Handler is written in pure assembly. The code relies on a fact that the task’s stack pointer is the first element of the os_task_t structure - the structure’s address corresponds to the address of its first element according to C language specification.

Each task is defined by its handler function and stack. The initialization phase of task’s stack must ensure that the first 64 bytes (16 words) form a valid exception frame. It is neccessary to store at least the default value of three registers:

The startup phase has to configure SysTick and PendSV interrupt levels, initialize the SysTick timer to fire interrupts periodically and start the first task.

As the microcontroller starts in Privileged Thread Mode with Main Stack it is neccessary to switch to Unprivileged mode with Process Stack. This is done by writing to the CONTROL register followed by ISB instruction.

The os_start function is written without inline assembly thanks to functions and intrinsics provided by the CMSIS library.

An example runs three tasks (which are switched every second). All tasks blink the onboard LED with different frequency.

The example can be run on STM32F030R8 Nucleo board and requires STM32Cube software pack which has to be present in the lib directory.

The SysTick timer and Privileged mode are optional features of the ARMv6-M architecture. They are however supported by vast majority of microcontrollers.

The code relies on standard CMSIS library by ARM which is usually distributed by microcontroller vendors. The library provides functions and intrinsics for accessing features of the ARM Cortex-M core.